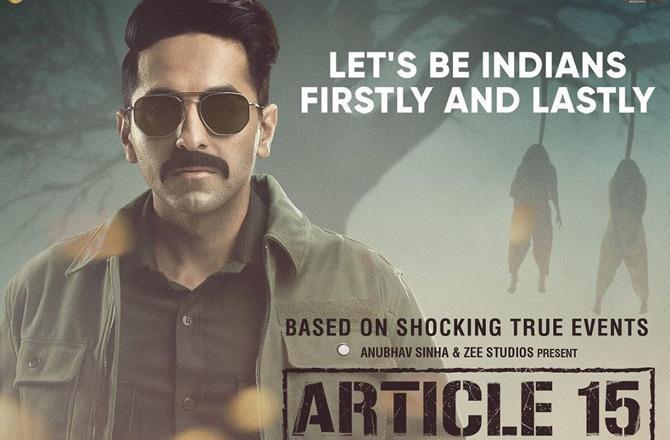 “Caste system” is nothing but an ancient work division system that was developed to make the work more efficient and easier. It is rather called “Varna Vyavastha- Colour/Class System”. Work division is what we identify in modern work culture too. A sales man does selling , while production guy looks after the production of goods and so on and so forth. And as time goes by the systems need to be upgraded / replaced with better systems. Because in the beginning everyone is able to identify the help a system does or with the positive things that it brings on the table. But any system has both good and bad sides to it. And as time goes by the negative becomes bigger and bigger and at that time you need to either upgrade it or shut it down entirely.

As per Hindu culture this work of elimination/destruction is to be done by “The Mahadev”. As he is the only one who is powerful enough to drink the poison and also keep it at bay. And a story that has been told to make a simple man take up the arms as per the time’s calling turns into something else. Since ages through our folklore and stories and ancient teachings we have been taught indirectly to wait for a hero or a savior. Or may be we have misunderstood it or we have lost the true meaning behind them. And once again a common man finds ways to get away with “Mujhe usse kya?” Or “Humein kya fark padta hai?/ How does it matter to me??”. But The Mahadeva is none other then just a common man. As it is said “Har Har Mahadev / Everyone is Mahadev/ God and Devil are both inside of you”. It simply depends on the choices we make. 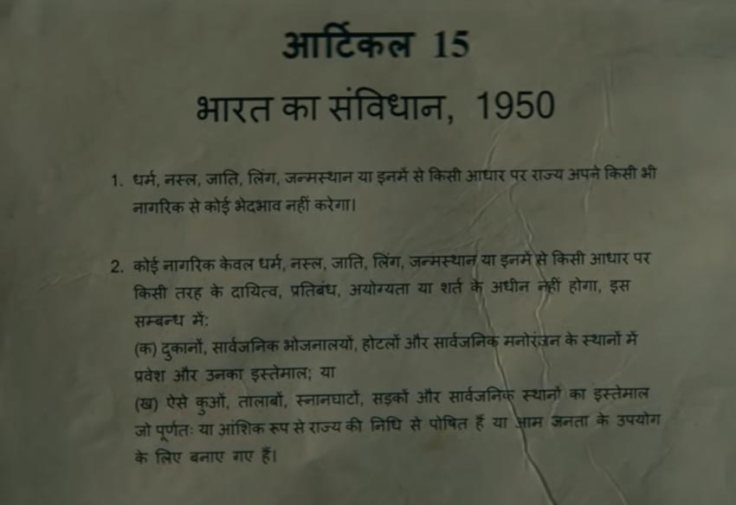 Article 15 is the story about an ordinary man in extra ordinary circumstances who decides to do something about it. Well he is the hero of the story here and if he doesn’t do it who will right ?? Our hero , a newly minted IPS posted in fictional village Lalgaon finds himself at odds with lots of ideologies which have made their roots very deep since thousands of years. Having studied at a top college of Delhi and European countries he doesn’t waste time expressing to his girlfriend that he finds the setting eerily similar to the Wild Wild West. These are the conversations which give the film its gravitas. Two intelligent and highly educated mindsets speaking with each other and trying to find a solution to the situation/making sense of it time to time. A case where local girls who used to work in a factory have been hanged from a Tree for everyone to see – Just because they asked for 3 rs increase in their daily wages and third girl is still missing. And all of it just to make them remember their “Aukat”. And who will decide this “Aukat”? Constant motivations from the other side of the phone keep him going, to be relentless in the search of the third girl and bring the culprit to the justice.

Entire movie is painted in a Dark, grim tone. And it is required to give justice to the subject at hand as any humor might defeat the purpose of the movie. You also are made to understand what will be the consequences if these so called “lower castes ” give up doing the good work they have been doing. They are the ones who keep their hands dirty so you can keep yours clean. And that’s how a point drives home. All of us are supposed to be equal. No work is small or big. Everyone have equally important value in the entire ecosystem or balance. But then who decides what is balance?? Is balance something that keeps a Sudra a Sudra and Kshatriya a Kshatriya or in this movie’s language ,a Raja (King) to continue to be a Raja and Praja (common man) to continue to be a Praja. What good is a system which does not promote meritocracy!!! But then these Taboos pervade everywhere we go..our society or where we work!!!

You see characters who speak so nicely but behind the back are deadly against our hero. And this is what makes us connect to the film as we encounter them in real life too. They are so dependent on the system/ have accepted it in such a manner that any changes will also make them collapse with it. That is why they are deadly against those who want to bring a change to the existing balance/system. They are also only humans and show their humanity by feeding stray dogs with biscuits. But when it comes to their fellow humans or officers they would rather have them doing “Jhadu” just because they are born “Sudra”.

But then there are also those who join hands with our hero to bring the necessary change no matter what the cost. They are the ones who have accepted the system as it is but are also ready for a change. One of the character says “In logo” ke saath to aisa hi hota hai!!” ” Yeh log to isi ke layak hai!”. And our IPS asks him ” Kaun log??”.

And these constantly nagging questions make you look at the big picture / try and understand it. Sudras or SC/ST AND OBC comprise 70% of our system ?? Shit . Never realized it!! One scene is particularly interesting where our hero asks all of his colleagues about their caste. And they all come up with very minute details in an instant and have differences about who is “upper” and “lower” clearly prescribed in their mind.

End is very realistic!! The real culprits go Scott free by doing politics and extracting their benefit out of the ensuing conflict while the people keep on fighting with each other.

Slow motion and over the head shots are ably used to drive important scenes but sometimes tend to become a bit boring too. Cinematography is great and back ground scores keep the mood engaged.

Ayushman fits perfectly in his character of “Firangi policewala” who stays grounded in the entire movie and does not indulge in unnecessary hero Giri!! This guys is going places by doing meaningful cinema. Manoj Pahwa , Kumud Mishra, Mohammad Zeeshan Ayub and Sayani Gupta are also perfect and show stoppers at times.

It’s a one more gripping and intense movie from the stable of Mr. Anubhav Sinha (Mulk famed ) which will keep you discussing even after you leave the hall.

Anything that has a beginning has an end. And may be cast system is also asking for the same ending. A Brahman by surname is no longer doing only the Brahman’s work/ teaching. Now a days you may find him go out and sell something or start his own business. A Kshatriya by surname no longer goes to fight the wars. So why do the castes still exist ?? Maybe to classify between the higher ones and the lower ones. But aren’t we leaving in a 21st century where the “karma” needs to decide one’s true worth, not “Janma “?

When this system was introduced there must have been provisions to keep the biases from entering the system. But as time went by the people or shall we say “powerful people” got rid of them and started using the system for their own selfishness. So the son of a Brahman started becoming Brahman although he had tendencies more towards being an able Vaishya or a Sudra !! Any religion does not remain Sana-than if it does not remain flexible and some amendments time to time are necessary. And even today may be only one community still does its designated work with their entire heart. Whether they want to or not!! Sudra !! And they are the real heroes of this movie.

One thought on “Article 15- The verdict”